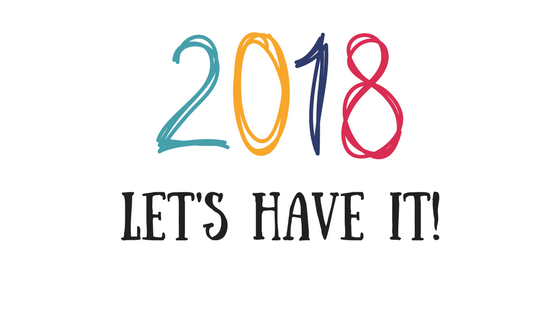 I’m sat in bed writing this post after what has to have been the most boring New Year I have ever had. We don’t ever get out on NYE which doesn’t bother me one bit but we usually order food in. Watch the equivalent of Sydney Harbour fireworks kicking off from the neighbours out the window and at least acknowledge the year passing.

This year the only thing I celebrating passing was the bug I had picked up from Reilly.  Bedroom bound for 2 days with frequent trips to the loo (remember I can’t go til Reilly goes first so it gets tricky).  I managed an hour downstairs with a dry bit of toast and League of Gentlemen then back into bed.  Today has been just as fun.  I’ve looked at approximately 150 holidays with Reilly who is now in holiday mode, watched Charlie and Lola ‘we can look after your dog’ 100 times and didn’t get to see 2 minutes of Dunkirk because Reilly has attached himself to me like a lovable barnacle to a rudder. Instead I retreat back upstairs and in the small amounts of time I’m permitted my phone I scroll through peoples look how amazing our NYE is posts and swear under my breath.

Seeing as I don’t like people that much it’s not the end of the world as i’ve made it sound and you’re actually welcome to NYE festivities I find it quite frankly overrated and shite and it has given me some time to reflect on 2017.  Thing that stands out the most is how much I have learned about autism.  Through researching but mostly by listening to autistic people.  Twitter is a fountain of knowledge that we as parents should be tapping into.  I will continue to do this. From the horses mouth cannot be wrong. You will be surprised and hopefully appalled at how huge the struggle is for their voices to be heard.  I want Reilly’s voice to be heard when he is ready and why shouldn’t it be?

2017 has brought lots of stress to our home.  Lack of childminders, money, anxiety, siblings, usual shit.  We continue to wade through it though. There’s always light at the end of the tunnel, might be in the distance but its there.  It also brought us Tarly Dog.  Worlds naughtiest pie stealing Puppy.

2017 brought The Life of Reilly play to the stage which was an incredible experience which will repeat on March 16th at Northern Stage.  Never in my wildest dreams did I ever think Id be minging around backstage at the Northern Stage with the thesps.  Loved it.  Never make an actor though.  I stood on the party scene cakes, had scripts stuck to marshmallows on my converse and marked all the beautifully polished floor.

That post.  That viral post.  Shane’s rant that went round the world and back again.  A very angry dad venting to his nearest and dearest that I copied to twitter.  Can only take the positives from it. Thousands of messages worldwide of support, I’ve broken my heart at lots of the emails with talk of suicide in children because of exclusion and bullying. Not good enough, not acceptable.  Fact is we all came from the wrinkly old bawbag lottery.  Respect each other and we’ll go a long way.

I’ve been trolled this year for the first time.  Vile cretins, it takes all my being not to respond or to read their comments but I’m trying.

2017 gave us a party! Reillys Party which was incredible.

The film pilot which is nearing its final week for crowdfunding has been a challenge. 5k in around a month is a big ask.  I decided to throw myself at it and see if we could do it.  The pilot will be used to hopefully get a full TV film off the ground.  I’ve seen Alison read through her lines with Crissy Rock for the 10 minute pilot and it is awesome.  With only 5 main characters in the scene and I’m sure most of you can envisage it.  Mam getting Reilly ready for school best she can, you all know how my mornings go! new taxi arrives, escort knocks on the door, mam never seen her before in her life, refuses to send Reilly with strangers, ends up in council offices for a showdown.  I’ve done it. Most of us have.

The actual film will see Reilly grow.  It will dispel some myths about autism.  It’ll look at the family dynamics and Reilly’s perception of it all.  It will see him grow into a young adult.  I don’t want to say too much.  It’s awesome.  Obvs not a real life story of my Reilly because he is 6.  This story is a collective of real life scenarios with guidance from autistic people.  Featuring autistic actors and crew is an absolute given.

If you want to donate before our time runs out you can at Life of Reilly Crowdfunder.  Every penny is appreciated.  Making a difference not just a donation.  People engage through drama we know that from the stage play.  We can hit a  much wider audience if we can take it to TV.  Let’s do it!! Only a week to raise around £700 to hit target.

2018 has potential to be amazing.  Reilly will continue to grow in handsomeness and awesomeness as per usual and hopefully the general publics understanding and acceptance of autism will too.

Big thankyou to everyone who has supported us this far with The Life of Reilly blog and by donating to the crowdfunder .  210k views isn’t bad going for a blog I imagined would get about 20.

One of the many things I adore about Reilly is his outburst of spontaneous laughter.