Ah don’t you just love the school holidays?  Actually no, no I don’t.  Holidays were hard before but now we have Tarly who just wants to eat your feet 24/7 so we have had to resort to drastic measures Reilly wears wellies in the house and I wear massive elf slippers from last christmas (not the greatest when the ice cream man rolls up playing his snooker themed chime and you’ve got a printed jumpsuit, no bra, elf slippers and a colour on your hair).  He still got his ice cream!   If you snooze you lose and he’ll take your toes off.  Its like a constant game of the floor is lava trying to get from living room to kitchen.  Reilly has even took to sitting in Tarly’s crate with the door shut, if I get reported to social services please be assured this is Reilly’s choice not mine 🙂

When Reilly isn’t squealing to escape his little needley gob he pretty much loves him and really belly laughs at a lot of his antics which is just fab!  I distinctly heard Reilly attempt to say ‘down’ yesterday but didn’t capture it on video.  He hears it A LOT to be fair.

I’m doubly vigilant as i’m not only watching for escaping Reilly’s but also escaping Tarlys too i’m checking doors like someone with OCD – I can say that I have it!

This morning when I was putting the mountainous piles of washing away (unironed) I was happy in the knowledge that the front door was absolutely locked and the keys out of reach.  The back door was open to allow Tarly to run in and out if he wants to and for Reilly to play on his swing.  Gate is padlocked so happy days.

What I didn’t bargain for was the fact that Reilly had switched the hose pipe on and had brought it through the kitchen into the garage which was filling up like a canny little paddling pool.  Luckily there are 5 suitcases full of crap, 2 christmas trees, 2 bikes, 3 guitars, a wardrobe, 2 fireplaces, numerous bits of thomas track in boxes, some coving and 10 bags of clothes recycling bags to absorb some of the flow.  Was like something from the day after tomorrow.

Every towel in my house was used, big sloppy cold messes that dribbled everywhere en-route to the washer.  Yak!

Anyway we rounded off the day with a trip to Round the Twist and Asda so that equals a happy Reilly.  He even stopped going up the slide instead of down it after I told him the slide police were watching.

He’s currently melting down because I used his penguin christmas plastic plate and he’s trying to bite it in half.  Neighbours if you are listening calm will be restored very soon. 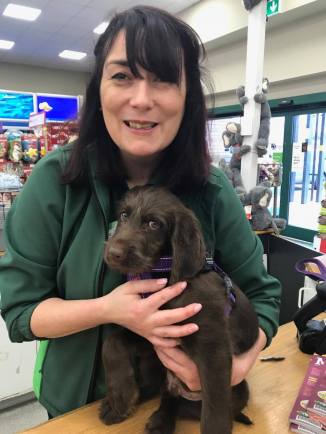 Tarly went to the vets last week.  The peeps at Pets at Home Cramlington were fab and a little bit smitten with the boy xx

Strange thing happened when we were in Warrenpoint this week.  Myself and Reilly were playing on the beach while Shane and Ellis played football in the park across the way.

Reilly will happily stay on the beach as long as he’s allowed to or until he’s bordering on actually freezing.  A discarded yazoo milkshake bottle was his play thing for the beach and he sat for ages filling it with sand and pouring it over his toes.

He made a break for the water to fill up his bottle, me like an upside down turtle trying to get up and leg it after him with my dodgy plated ankle was a no hoper and out of nowhere appeared this dog.  It wouldn’t let Reilly near the water, Reilly would have gone straight in, no fear.  The dog kept standing in front of him and then rounding him like a sheep it was amazing to watch.  Whether the dog was a service dog or not I really don’t know, it had a collar but I never saw it’s owner the whole time I was there.  He/she hung about with us for about an hour.

I’ve toyed with the idea of an autism service dog for a long time and this settles the question for me.  The experience also prompted Reilly to try and say dog!

Anyone with information regarding trained service dogs please let me know.  I think they may be very expensive but when it comes to safety and companionship we’ll have to find it from somewhere.