What a lovely day we’ve had !  As many of you know I am one half of the fabulous North East Hearts with Goals defibrillator charity and today we were invited along to the Great North Dog Walk at South Shields and Reilly was coming with me, god help us.

Excused from the 8 am set up and start (Reilly’s morning routine wouldn’t allow it) we got there for about 10 am.  There were already thousands of walkers and dogs there, Reilly took one look and bolted with Shane hot footing it behind him.  They came back 2.5 hours later after some chips at The Sand Dancer pub on the beach (the staff  were brilliant with him by the way and we will definately go back) and some paddling in the sea.  I had even managed single handedly to get my gazebo up and catch a few rays while they were gone

He came back like a new little boy. Dogs and people no longer an issue he donned his Krispy Kreme hat and looked cute as per usual which pulled in the customers.  We saw a dog wedding, yes really we did, he watched the dog training and he was brilliant.  I am genuinely shocked by his behaviour I was expecting meltdowns and runners.  I did have to run after a couple of times but nothing major.

I talked to the charity Dogs for Good too about autism service dogs.  I’ve been thinking about this for a long time now and think it may be absolutely perfect for Reilly.  True friendship and a protector, an extra set of eyes on him it’s not like we don’t need them.  So that’s my homework for this week to learn as much as I can about autism service dogs and work out if it’s right for us and how on earth we pay for it. 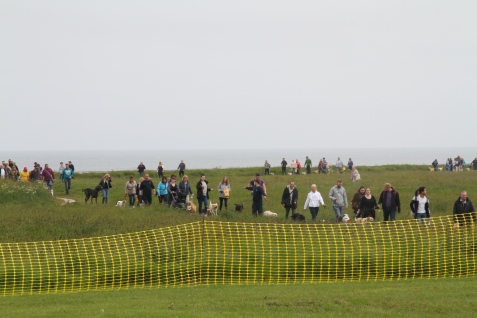 Excellent day all round.  Great North Dog Walk broke a world record today with around 28 thousand dogs registered to take part and we were over the moon to be part of it, great people and organisation.  Highly recommended for next year.