Felt like I needed to post this as it’s so rare! When we get on the bus Reilly loves to put the coins in the drivers coin holder thingy, I always have to explain as Reilly literally won’t move til he’s had a bash.

As you can imagine sometimes I get the odd grunt, sometimes no response whatsoever from the drivers.  Not today! This driver when I told him about Reilly (after handing over a load of 20p’s and 10p’s – couldn’t have just been 2 pound coins that’s too easy) said don’t you worry and proceeded to show Reilly where to put the coins regardless of the queue behind who also didn’t mind one bit being held up.

Small gestures like this make a big difference in a world where we as SEN families are constantly battling for an easier ride.

Maybe it’s the sun but what a good week so far. 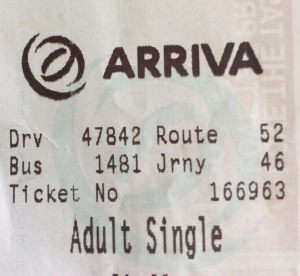