I never dreamt I had the conversation the other day with my Mam about xmas dinner and where that would take place because she was actually panicking.

While everyone loves a bit of christmas planning ours actually needs a yuletide strategist. A trouble shooter who will identify the hiccups before they happen, not such thing you say?  That’ll be me then!

Reilly will NOT leave the christmas tree alone.  He adores it but likes it lying down rather than standing up.  So after seeking advice this year I shall be buying a pop up christmas tree with sewn on baubles.  I spent approx 200 hours last year picking up baubles and I didn’t enjoy it.  I also had to modify the christmas tree stand several times as the legs snapped off one by one, always wonky like the Leaning Tower of Jesus.  Keep your fingers crossed for me this one works and it will  be up by Monday.

Reilly has so much Thomas Trackmaster and Cars figures that it makes me feel queasy just looking at them when I know EVERY SINGLE PIECE has to be emptied onto the floor when he’s playing with them and subsequently picked up by me 365 days a year. I don’t want anymore but other than floorboards he doesn’t really play with anything else.

He also insists on opening everyone else’s presents which doesn’t go down well with the rest of the family.

My Mam & Dad came to me last year and Reilly slept right through dinner.  It was brilliant but I’m not lucky enough for that to happen twice so it needs to be planned.  We don’t want Reilly the greek smashing up the dinner table and there’s a 99% chance he will.  Will be prepared at Mam’s with the option of takeaway back to my house if required.

I HATE that he can’t tell me how excited he is and I HATE that i’m not sure he understands what exactly is going on.  I show him christmas cartoons and photos of Santa all the time and i’m pleased to say he now links Santa with presents so I’m really hoping we get a glimmer of magic this christmas eve.

I imagine in his head he’s thinking what the hell is the silly cow doing throwing my craft glitter and porridge in the garden.  I will continue to do it though quite possibly past his 18th birthday.

Cinema on christmas eve – no chance.

A split in the family to make sure Ellis doesn’t miss out is essential.  Every year Reilly is a little better so here’s hoping.

Christmas brings way more callers to the door and we really can’t do anything about that, I love visitors, they sometimes wash my dishes. Alas it’s another thing the Reilly doesn’t like. I would love to be able to go visiting on christmas day but the chaos that christmas can bring isn’t a comfortable place for Reilly.

I think Santa may have more in common with our cherubs than I thought though.  He wears the same clothes all the time.  He checks who’s naughty or nice (no inbetween), he makes lists and checks them, he is pretty isolated and works when everyone is sleeping, he squeezes into tight spaces and doesn’t give a shit that its weird letting himself in people’s homes and leaving presents, he only eats beige food cookies and pies and he has one hell of a routine. 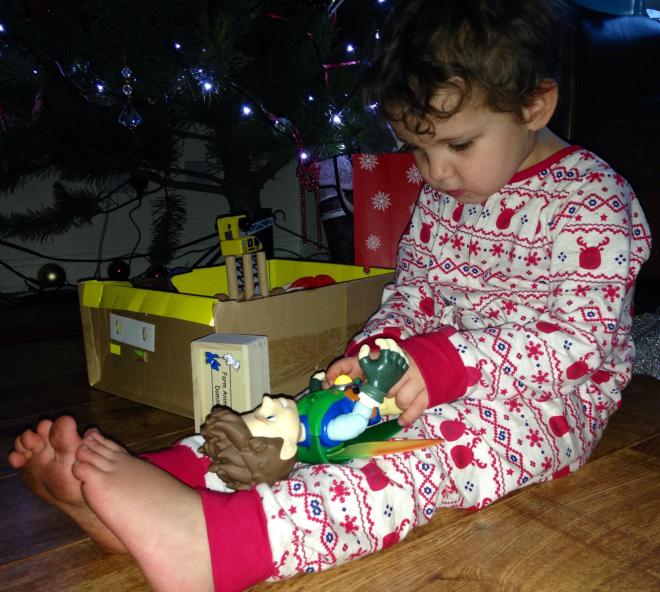 2 thoughts on “The Nightmare before Christmas”